Wing Commander II had a plan to include a TV you would watch between missions to get broader story updates. The design called for it to be the same dimensions as the Ultima VI intro TV so they could share art! This can be seen in a recent Tweet from the crazy ass moments in furry history account or watch it on YouTube here.

The opening of Ultima VI prominently features a pixelized recreation of a Keith Berdak illustration of a zebra centaur pole dancer(?) as a late replacement for what was originally a Patrick Nagel painting they couldn't get cleared. (1990) 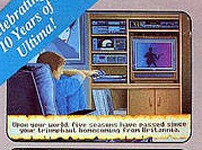 This was part of a dropped character they’d imagined named Jerry Rivers who was a kind of ‘90s dramatic TV host, Hard Copy/Geraldo style. His arc would’ve ended with an interview where Tolwyn punches him in the face!

You can find an early script outine with all the Jerry Rivers sequences at this link. Jerry IS canon, Shotglass mentions watching him in Secret Missions 2 (and Bluehair tells him it'll rot his brain).

In what is probably a coincidence, Wing Commander IV uses the same device, having the characters watch an interview with Admiral Tolwyn to help move the story along. (Tolwyn does not punch Barbara Miles, though, he just acts like a smug jerk.) 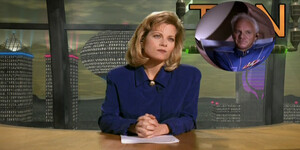 In another coincidence, the characters in Wing Commander IV also watch their news on a small CRT TV from 1991. 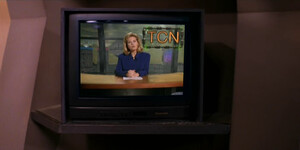