Our Polaroid research continues to produce surprising stories: this time, we've found a justified star. Or at least... the star of Justified! While the label on the photograph reads "BW Pilot Garret 'Moose'", the actor in question is none other than Walton Goggins (credited as Walt Goggins). Moose appears in the Peleus jamming scene, one of the three Border Worlds Banshee pilots that are ambushed and shot down by a flight of Excaliburs. The Polaroid gives us a great look at a Border Worlds flight suit, which the production dyed grey from the original tan Confederation suits with some minor alterations (like the Union of Border Worlds patch on his left shoulder). 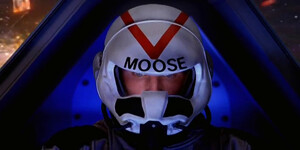 Credited as Border Worlds Pilot #3, Mr. Goggins would quickly go from nearly faceless tertiary character to major star, one of the more recognizable actors working today. In the last decade he has conquered both television with lead roles in Justified, Vice Principals and others and film with appearances in movies like Predators, The Hateful Eight and the recent Tomb Raider. While his face is never seen in Wing Commander IV, his distinct ice blue eyes are easy to pick out! 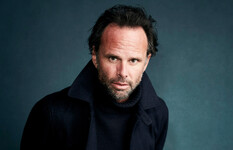 So why haven't you noticed Walton Goggins before? It's not because of his blink-and-you-miss-it, visually obscured role... it's because the game and it's associated media have told you to think of the person beneath the Moose helmet as a large bald man! Unlike the other two 'jammer' victims, Hacker and Bob-O-Matte, Moose appears as an option on the Intrepid's roster of wingmen up until his scripted death which means you can pick him from the screen below where he is clearly not Walton Goggins. 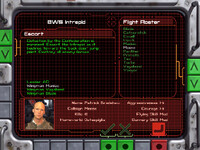 That's because the 'redshirt' pilot portraits on the selection screen aren't from the film production at all... in fact, they're the Origin developers identified in the listed names. Here, Moose's face is Wing Commander IV's assistant product manager Patrick Bradshaw. Mr. Bradshaw worked in Origin's marketing group and served as product manager for Wing Commander IV, Kilrathi Saga, Privateer 2, Prophecy and other familiar titles. He may be best known to players, though, as the model for the four-page Christmas-themed Origin advertisement which appeared in magazines around December 1995. Origin held an open casting call for this campaign at the office and several developers appeared in related ads. Talk about putting everything into the job!

If you're a veteran of the Playstation version of the game then you may be confused by all this; the Playstation team kept the original portraits but used the names as an opportunity to tuckerize their own team members... Patrick "Moose" Bradshaw becomes Brian "Moose" Adams, credited as PlayStation Data Manager on the title. It's also interesting that Moose's canonical biography from Origin's Official Guide to Wing Commander IV further reinforces the idea implied by his callsign that he's an imposing, tall man despite this never being visible in any way in the game: 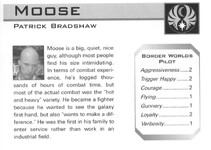 Moose is a big, quiet nice guy, although most people find his size intimidating. In terms of combat experience, he's logged thousands of hours of combat time, but most of the actual combat was of the "hot and heavy" variety. He became a fighter because he wanted to see the galaxy first hand, but also "wants to make a difference". He was the first in his family to enter service rather than work in an industrial field.

You also don't hear Goggins voice when you fly with Moose. That's because most (but not all - more on that in a future update!) of the redshirts don't have unique videos and their voiceover work was done by local voice talent in Austin rather than actors from the film shoot. Instead, the second unit shoot recorded loops of a pilot with an unlabeled helmet. Since the clips don't show the characters' mouths, any set of responses could be played over these clips. That's why Moose has a helmet in the film clip above but when you fly with him you simply see this: 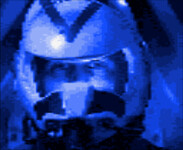 You may recall that we've previously covered Border Worlds Pilot #1, "Bob-O-Matte", who was played by Mauricio Mendoza. That leaves one more credited Border Worlds pilot from the jammer scene... and we'll learn more about his surprising life next!