Stinger has released the next big update to wcdx, the compatibility program that enables Kilrathi Saga to run smoothly on modern versions of Windows. In recent years he's moved on from just getting the game to run and has been steadily adding back in features that the DOS version had but were missing or not properly implemented in KS. With this new update, he's essentially completely restored everything missing from WC1, so now he can turn his attention more fully to WC2. The last big hurdle was cockpit damage. Although it can be annoying when your dashboard sparks and you lose radar, this is critical to the classic immersive Wing Commander experience. Now you too can struggle to request landing clearance through a busted comm system as we all did in the old days! Grab wcdx 2.2.1 here. Each thumbnail below is an animated gif of the new features in action, so give them an extra few moments to load. 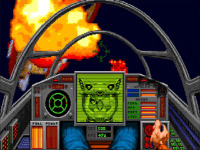 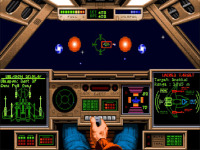 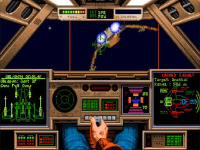 Cockpit damage is finally here! Now you, too, can watch your cockpit come alive as it disintegrates around you! Is WC2 too much of a cakewalk? Try it without your radar!

Of course, cockpit damage would never be complete if it didn't cause your VDUs to go all crazy. VDU static somehow never quite materialized in the Kilrathi Saga, but now it's here! Who doesn't love that brief flicker of static during comms messages?

I believe this completes the missing feature set for WC1. WC2 still needs a lot of work for cut scenes, and I think the input handling could be a lot better. Expect to see more updates in the future, though I make no promises on timing. It only took me... eleven months... since the last release to fix these two small issues. How time flies...