MK Podcast Explores The Saga of the Warrior King 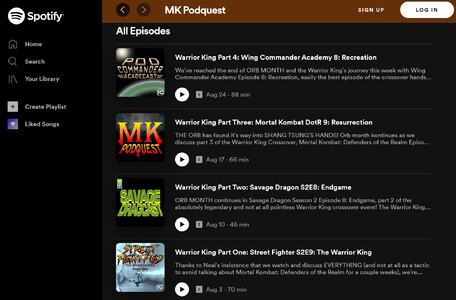 The MK Podquest is an undertaking after our own heart. They're a dedicated podcast founded to focus on the 22-episode 1998 television show Mortal Kombat Conquest. They've also branched out to other elements of the franchise, which led them to the Mortal Kombat cartoon, Defenders of the Realm. You know where this is going: the Saga of the Warrior King.

In 1996 Michael Dorn voiced a space viking that chases after an orb across the Street Fighter, Savage Dragon, Mortal Kombat and then Wing Commander Academy universes in an epic and inexplicable crossover event. The MK Podquest duo have spent the past month examining every chapter in this story, and Wing Commander is their finale event. They went in with low expectations and zero experience with the WC series, and the team was pleasantly surprised. It's their overwhelming favorite, and it's entertaining to hear them learn about and explore the WC franchise. The episode is an hour and a half long, so buckle down for the ride! Check out the podcast on Spotify, Google, Apple or Stitcher.

It's time! Part 4 of The Warrior King Crossover is here and honestly it kicked ass. #ORB

It's time! Part 4 of The Warrior King Crossover is here and honestly it kicked ass. #ORBhttps://t.co/a6Pc5JCAAu

We've reached the end of ORB MONTH and the Warrior King's journey this week with Wing Commander Academy Episode 8: Recreation, easily the best episode of the crossover hands down. Neal is now fully a Wing Commander guy. Also we messed around with a soundboard on this one so expect a ton of airhorns.

If this makes you want to go back and rewatch Academy yourself, check it out on Peacock or DVD.