Last year had plenty of low points, but Wing Commander fans persevered throughout the dark times and still managed to do some amazing things. We were able to pick out ten of them for special recognition, and Wingnuts have spent the last several weeks voting on which should take the top honors. It's always slightly painful to deem one or two the winners, since all of the nominees and more do such great things for the community, but it's usually clear that a few bubble up to the top.

This time around, our winner for Fan Project of the Year is AI/Neural Net Enhanced Wing Commander Videos! ODVS managed to successfully create what was one thought impossible, an extremely faithful upscaling of the original games' low res footage into HD quality. By mastering a handful of advanced AI/neural net tools, the process creates detail where none was present to boost the footage. He's completed full passes on WC3, WC4 and WCP, and the latter two can be integrated into the games themselves. Someday WC3 may be possible as well. Continued work looks to push things even further into the 4K/60Hz realm with even better tools and processing. Grab them for yourself here!

Our first runner up this year is the WC4 Fan Remake! The team has been releasing a steady stream of articles at their new website, WCRespace, that explain the complex process they're going through to retouch and improve all aspects of the original game. It also doesn't hurt that the movie sequences will natively integrate ODVS' enhanced videos either. Experts in coding, art and even music have all come together to help make this project the best it can be. They're shooting for a playable demo as soon as this year, so stay tuned for more awesomeness on the horizon!

Another honorable mention and second runner up this year is wcdx. Stinger has been hard at work on this comprehensive compatibility patch for more than six years, and the latest releases touch WC1, WC2 and all four of their expansions. Over time the project has grown to do more than just get Kilrathi Saga running on modern computers. It's going back and adding back features from the DOS originals that didn't import smoothly to Windows in the first place, such as missing background space art and awkward audio glitches. You can grab it here! 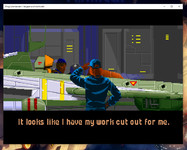