Wow, three decades since this title screen began gracing monitors around the globe! The Wing Commander series celebrates its 30th birthday today, and we're excited to have seen it through all this way. After all this time, what do we say? Countless articles have been written about how revolutionary the series was for its time and how well it's held up after all this years. I still appreciate the new ones being written even today as they help put the games in context for the continuously evolving gaming landscape. When I think back on all this time though, the biggest things that stand out are the friendships, community and sense of combined experience that Wing Commander fans share. Many of us have been part of the online world of WC for two dozen years, and the CIC itself has been established at wcnews.com for nearly three quarters of the series' life. Wingnuts don't just love Wing Commander, but they're into a whole host of related things that have provided countless hours of enjoyment. It's especially fun to see new fans join the fray, including many who were actually born after the CIC was launched. Older fans help with the historical framework while newer members bring fresh insight, and we have a great time. 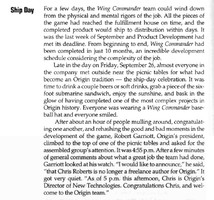 Late in the day on Friday, September 26, almost everyone in the company met outside near the picnic tables for what had become an Origin tradition - the ship-day celebration. It was time to drink a couple beers or soft drinks, grab a piece of the six-foot submarine sandwich, enjoy the sunshine, and bask in the glow of having completed one of the most complex projects in Origin history. Everyone was wearing a Wing Commander baseball hat and everyone smiled.

Back to matters at hand, dedicated fans continue to work on some amazing things to share with you all soon. I'm happy to report that we have positive news on the medical issue we mentioned yesterday too, so our party will likely be rescheduled sooner rather than later. And fans are still celebrating the series' birthday today in a variety of ways. Bonkus_Maximumus will be among the pilots broadcasting a play through of the original game tonight on Twitch. Check it out here at 5pm Pacific/8pm Eastern to follow along with that. We'll also be in #Wingnut on Discord all day, so feel free to drop in and say hello! And if you'd still like something fun to watch, here's an archive of last year's stream: