Here's a pair of cool print previews for Privateer 2 that bookend the development quite well. First up is an "alpha" peek by Next Generation magazine in their September 1995 issue. At this point the game is still just "The Darkening" and hasn't yet gotten its official Privateer affiliation, but almost every inch of the article is about drawing comparison to its Wing Commander series "forebears." There's also a later 1996 article from the French Joystick magazine. Its focus is on Mathilda May, who had an oversized presence in marketing at the time compared to her screen time in the game. You can compare the background setting images in the two pieces to see how much closer this one is to the final product, including its lineup of ship models and gameplay mockups. 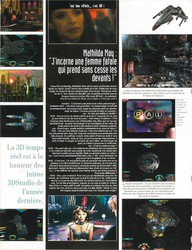 As Hollywood firms sign off precarious seven-digit budgets in search of the perfect "interactive" formula, Origin Systems has already blazed its own path with the successful Wing Commander series.

"The technology we're using makes Wing Commander look like a dinosaur," said Roberts, whose $5-million budget is the highest for a video game (though Wing 4 is rumored at $7 million). The game will use SVGA graphics, accesses a more compact, and much faster engine than the one used in Wing 3, rendering graphics on-the-fly."

True playability of interactive movies is still questionable, and while The Darkening is only 15% complete and has the Wing series to live up to, it's got everything to make its forebears shiver in their knickers.