I looked away for a couple weeks and EmuMusicFan made more tremendous strides in his interactive graphical novel project. He's added a ton of characters: most are familiar faces from the WC4 era, but he's even concocted a Varni for good measure. We've been showing off his cool artwork all year with occasional glimpses at what the finished product might look like, and Emu's made another sample video that does a great job of showing off the combined results. These are built in the Ren'Py Visual Novel Engine. In this sequence he's recreated a scene from Wing Commander 4, but obviously original stories are possible too. Even branches can be added!

Finally I've made a tiny episode with dialogue dubbed in. This way the basic functionality of this visual novel engine is even able to be demonstrated. The plot is the conversation of "high-tech pay-back". The voice clips are from the game. 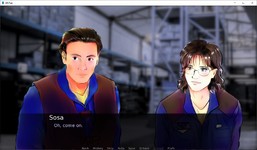 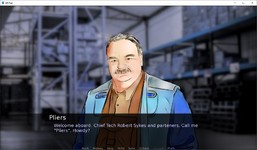 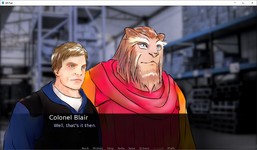 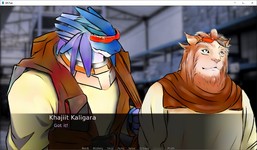 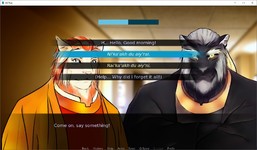 Finally I've drawn a portrait of the third race... I think the Varni were only mentioned in the novel, right? I haven't been able to find the official portraits of Varni, so I am working on myself. I'd like to be corrected if there are any discrepancies.

Kna is a fourth-generation of enslaved Varni. He no longer speaks Varni's own language. In contrast, Kna speaks the Terran language more fluently. His name is also derived from a Kilrah word, which is actually a number for him. Every Varni slave is numbered in order at birth, and he was the first of that batch to break shell, so kna is his number, No. 0. He is a slave of Haga Kaligara's hrai, along with Khajiit working as a mechanic's assistant on Melek's team. Except for the fact that every Varni slave was born with their poison glands removed, no other body parts of Kna were deprived. Haga Kaligara does not mistreat him. His engineering talent is outstanding and Khajiit needs his hand.

One detail is that his slave collar was fastened by Khajiit over the collar assembly of a flight suit, makes it more comfortable than wearing it directly around the neck.