People have been finding a lot of fascinating old magazine articles lately, and here's an interesting one from Computer Games Strategy Plus. FredDude found this Wing Commander 2 review in the December 1991 issue. It's interesting for a professional review - the author seemed to lack a powerful enough PC necessarily for decent performance, and he encountered a couple of bugs right off the bat that game developers today would have quickly worked to mitigate for a high profile print review. He calls the number of Tiger's Claw survivors "implausible" and the speed of the cutscenes "infuriating." He also never played far enough into WC2 to fly a Sabre nor even experience a bombing run in the Broadsword, which was a marquee feature. All in all, it doesn't quite seem like he was ready to review the game. If I was the editor, I likewise would not have considered this ready to go to print. Maybe this gives you an idea about the state of the industry in the early days. 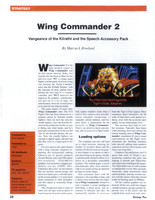 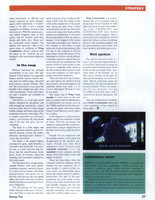 A nice feature is a 'replay mission' option, used if your character is killed or ejects. This lets you bypass the funeral or reprimand that would normally follow, and go straight back to the start of the mission after the briefing.

Overall I'm very impressed with the combat sections of this game, but disappointed by the narrative passages.