Earlier this week we posted a neat Deluxe Edition of WC1 on CD. That spurred LOAF to dig up this classic ad from late 1992. It's a Software Toolworks catalog with Wing Commander on the cover. In this case it's the Super Nintendo version of the game on display. Flipping through these booklets was magical back in the day - they were full of so much potential fun! While the world frets about whether retail prices will bump up to $70 on the Playstation 5/Xbox Series X this fall, check out that $69.95 MSRP here! That would be like $127 today (and that beats the PC version's $79.95 MSRP two years prior!). 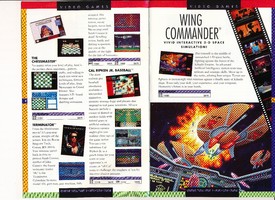 Put yourself in the middle of unmatched 3-D space battle, fighting against the forces of the Kilrathi Empire. An advanced Artificial Intelligence system tests your reflexes and strategic skills. Move up in the ranks, piloting four unique Terran star fighters in increasingly vital missions against a deadly array of Kilrathi ships. Trust only your skill, your experience, and your wingman. Humanity's future is in your hands.