We got a peek at Klavs' new Rapier last week, and it turns out that the ship is part of a triple pack. To the untrained eye Rapiers might just look like Rapiers, but we've actually seen several different variants over the years. The prototype and early production Y/F-44A we see in Wing Commander 1 has a number of unique elements compared to the later F-44G featured in Wing Commander 2. We see it again in Wing Commander Arena, where it most closely resembles a modified version of the fighter as it appears in Super Wing Commander. It'll be interesting to see how these designs continue to shape up!

"Starve before doing business with the damned Navy. They don't know what the hell they want and will drive you up a wall before they break either your heart or a more exposed part of your anatomy." - Kelly Johnson, 20th Century Aerospace Engineer 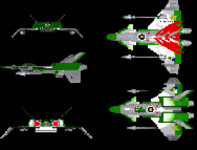 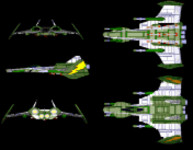 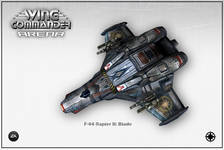