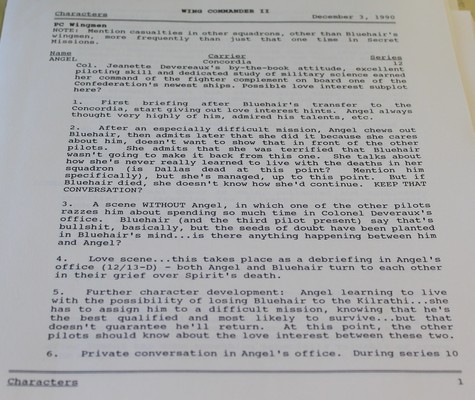 Wing Commander II Characters is a development document created during the making of Wing Commander II: Vengeance of the Kilrathi. It is dated December 3, 1990 and is an early description of Wing Commander II's characters and their planned story arcs. The document is part of the Warren Spector Papers at the University of Texas at Austin's Briscoe Center for American History (box 2008-091/6).

Much of the material planned in the document is significantly different from the finished game including plans for significantly more missions to take place before the arrival of the Concordia. Some of the characters were ultimately cut or referred to only in dialogue; others, like Bear and Minx, would reappear in other forms in the Special Operations missions. The role planned for Iceman would largely go to Stingray in the finished game. Other notable changes include early references to Hobbes as "Tomcat" and different first and last names for many of the secondary characters.