Former Origin senior artist Denis Loubet has revealed his latest nifty project. He's painted the cover art for a new single by the Swedish adventure rock band Hällas. It features an Ultima-esque avatar rising up into the moonlight. I wasn't familiar with the band at all, but the name certainly caught my eye. Dennis happens to be the visual creator of none other than Ralgha nar Hhallas, so it seems like a good fit.

My latest cover painting! I've been sitting on it waiting for its release! Hällas is an Adventure Rock band from Jönköping/Linköping Sweden. If I understand correctly this art will be the cover for one of their upcoming singles.

It's no mystery that this cover looks eerily similar to the Ultima IX cover given that Lord British himself suggested that the band get in contact with me! Their covers have a fairly consistent set of elements: a wide landscape, a ruined castle, an armored figure, and a glowering moon. This was a lot of fun to do, with some nice color contrasts and landscape practice. And the only thing that makes this not an Ultima cover is the lack of an ankh!

I've been waiting impatiently to be able to show this to you, and just got the word I can release it.

The painting above is cool and all, but something like this would have been pretty awesome too: 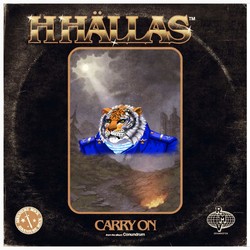 Don't blame me, I'm not like some kind of Photoshop guy or anything...