The image of an unreleased Wing Commander CCG box set has intrigued us for more than two decades, but we've got a slightly better idea of what happened now. Thunder Castle Games was a company that bought CCG developer Mag Force 7 shortly after the WC game was produced, and this boxed set of the series was proposed but never produced. AD reached out to the original artist, Brad Kelly, and he added this background:

I mocked up a number of gift set box designs for TCG including this one for Wing Commander. To my knowledge it never got published. TCG mostly imploded in 1996, hemorrhaging employees, including myself.

I don't recall details of any plans, beyond the obvious expectation of releasing a two-player gift box. I knew at the time that relations soured between TCG and MF7, but didn't know details. TCG had/has a reputation for burning bridges, so it was not unexpected.

I spoke to Margaret Weis years later at a conference, mentioned who I was, and that I had worked on this a bit. Asked in general terms what had happened and she just said that it was a bad experience. 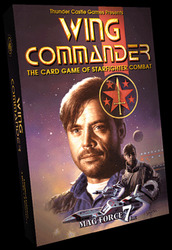