It's almost time for another episode of ALL WINGS CONSIDERED! For our fourth episode we'll be celebrating twenty years of the Wing Commander movie with a group watch. Join us this Thursday, March 14th, at 7 PM Eastern US Time (4 PM Pacific) on YouTube and Discord; be sure to bring a copy of the movie to watch along with us! 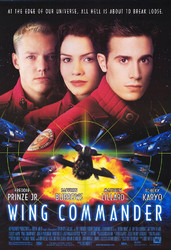 In 1999, they made a movie of my favorite video game. Like much of the fandom at the time, I was a senior in high school and it was that point in our lives when the world seemed most huge and infinite, the future seemed wonderful and terrifying and we all seemed like we could do no wrong. We had begged and pleaded with the God of intellectual property management for years for just this moment and its timing seemed almost divine: our favorite series elevated to the next level of respectability just as we too prepared to take off to start running the world. But this isn't a great success story about the best movie. I can't tell you that Wing Commander is a great movie. I can't even tell you it's a very good movie. What I can tell you is that Wing Commander is my favorite movie.

Growing old is straight out of a Twilight Zone script. You want badly to impart your hard-fought wisdom to the next generation. You want to save them from the pains and the troubles and the fears and the wasted efforts you went through. You want to tell them to forget battling one another and to focus on loving themselves because you wasted so much time on hating, most of all yourself. You want to tell them how much potential energy they have inside themselves because you had that same energy and you squandered it the same way they now will. You want to tell them that it's okay to be scared and that there are so many possibilities they can't understand right now because you remember what it was like to be so frightened and confused by the world. But of course you can't. It's one-way glass. The next generation can no sooner bow to your wisdom than you could that of your father.

The internet was new then and it wasn't quite so horrible. When they first hinted that a Wing Commander movie was on the way, my friends and I leaped into action in only the way a bunch of teenagers given full access to and no understanding of the terrible behemoth that was lurching on its hind legs preparing to radically change society. But to us, then, the internet was not a vehicle for destroying the world or a starry hope for saving it... it was a simple new tool that did the most amazing thing we could imagine at the time: it put us in touch with friends around the world who had the exact same excitement about a Wing Commander movie. We had the time of our lives tracking and recording and hunting for information about the production. It seems so silly in retrospect, but it felt so very adult to be translating newspaper stories from Luxembourg and having top secret instant message conversations with extras eager to talk about what they'd seen on set that day.

When the movie came out, I took my first ever cross country trip without my parents to attend the premiere in Austin, Texas. My best friend Chris Reid, also a rising high school student, flew in from the other side of the country. Before that week in March we'd been only IRC messages to one another and now we were flesh and blood humans. The whole experience had this sense of a jump to adulthood and to the next iteration our lives. And we did not care that the movie had changed the look of the space fighters or recast the heroes or even that last minute editing had made the plot incomprehensible to anyone who hadn't read the screenplay and the novelization beforehand. (Of course when you're eighteen you know that everyone has your same experiences so it stands to reason that everyone had read the screenplay and the novelization beforehand!)

In the years that followed, the Wing Commander movie became this common glue that kept us together. The series never came back, we never had another big cinematic Wing Commander game… but we all made the choice to stay Wing Commander fans and to keep that connection an important part of our lives. For a time, in our twenties, we used to battle about it: we cool kids who liked the movie and got something out of it versus the world. That's how it is when you're in your twenties you know: you and yours versus the world. It's a stupid way to live and it hurts everyone and you wish you could go back and change it the minute you grow past that way of thinking. But you can't! We matured and we learned to treat one another well and to focus our efforts on thought and creativity. And we grew up, more or less! Can you believe the nerdy kids in ill-fitting suits at the Paramount Theater on Congress on March 11, 1999 would be in each others weddings a decade and some change later. Who would have thought a couple of beautiful ladies would ever find us? As I say, I wouldn't have believed it if you'd told me, Through it all, Wing Commander was still our centerpiece, the thing we kept thinking about and talking about and enjoying just to have something familiar to enjoy. And most beautifully we learned to start asking questions instead of saying so to everyone. We applied that to our favorite movie: why did Chris Roberts make this choice? Where did this prop or this idea or this change from that script come from? How did they make this shot work? There's so much that comes from making sure you keep thinking.

So I'll say that I think you can write a very smart gotcha essay about how good a movie Wing Commander really was. That the beautiful set design and cinematography and wonderful cast of European character artists make it something really special. You could point out that the CGI and the adult themes hold up in exactly the way those same choices on the following month's The Phantom Menace, the 800-pound gorilla that forced it out the door unprepared, don't. But that's not my point. Wing Commander is mine and I'm happy with it for its warts. Looking back I think more than anything that it may have been the perfect film for lost, nerdy teenagers in 1999. It was so like us: full of infinite potential and many beautiful pieces that didn't quite know how to fit together. It spent so much time in its own head but ultimately suffered so much for trying to fit into a world that didn't care about that effort. They should've made more Wing Commanders the same way they should've made more Ben Lesnicks and more Chris Reids. Ah well, water under the bridge!

I still watch the Wing Commander movie today a couple times a year. I know there are better movies and newer movies and bigger movies and movies with so much more thought behind them. I don't care, Wing Commander is my lodestar. It's something that keeps me thinking in different ways and that connects me with the world. I'm absolutely fascinated by it. I understand today why no one else is but I hope they at the same time understand it's not some pretense on my part. I love the film for what it is and I do not care for what it isn't or what people once told me it should've been. I love what it adds to the Wing Commander universe and I love just the challenge and the thought that goes into finding new ways to think about it. I am never so happy after a long day of work to find that AD or LeHah or any of the other WingNuts who still populate a Discord together have made some minor discovery in the background of a scene or dug up some new nugget of information about how the movie was made. It's something that simultaneously takes us back and moves us forward and in a world of uncertainty and fear that's something I'll elect to keep holding onto.

At twenty years out I will again tell you that I can't speak through the glass. I can't tell you to be good to one another and to build and love and share and to put people and happiness over things and ideologies and all the other advice I had to learn instead of be given. And this isn't a rental recommendation, I won't tell you you need the Wing Commander movie in your life. It's mine and not yours and I've well learned the dangers of imposing my views on others. But if I could transmit one small wish across time and space and culture and void to all of you then it would be my sincere hope that in twenty years you're able to look back and realize that you have a favorite movie, too.

"Twenty years of service. Ironic isn't it? Twenty years, all to destroy the world that trains you." - Admiral William Wilson (cut)