We've got several new updates to share on the Secret Ops Model Upgrade Pack today. DefianceIndustries is working hard to prep the next big update to the playable test package. In addition to a variety of incremental improvements and graphical refinements, it will also feature a cool lighting upgrade made in conjunction with Dark Sentinel and Pedro. The Confed Superbase is also almost ready to go - check it out with both a Midway docked below! Stay tuned for more announcements as we approach the next MUP release. 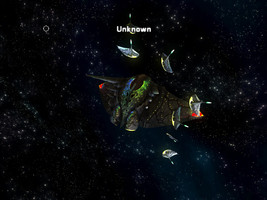 So this thread has been quiet for a bit, but that doesn't mean we haven't been busy. We're hard at work getting a new package ready as a holiday gift for loyal MUPpets. This new package addresses a number of defects identified in alpha 4.0 as well as adding some improvements to improve stability and a bunch of new graphical options that we intend to implement over the next few releases. One of the improvements we're most keen about is Iridescence. Now bug fighters will reflect different colors depending on their position from you and the angle of the light, giving the Nephilim hulls a more alien appearance as well as finally capturing that chitinous effect we see in the promotional renders! Here is a Work-in-progress shot that Dark Sentinel is working on with the Ray Node. You can expect most of the Bug fighters to get a facelift in the next patch.

Of course we haven't neglected new assets either - Now that we have emit mapping, we're able to really punch up the dated models (starbases especially) As Frosty himself says, "I’ve always wanted to see the Ella starbase, big enough to house the Midway between her landing bays. Supposed to be quite a sight." I'll leave it to you to decide if this qualifies... There will also be a few more assets to announce prior to launch. Stay tuned!