Electronic Arts is expanding its Origin Access service. It first launched in 2016 to provide players with the chance to play unlimited amounts of certain EA catalogue games as well as a discount on digital purchases. Now a new Premier tier also gives people access to EA's brand new games. It also gives subscribers the ability to start new titles five days before the official release date.

The new higher end level will cost $14.99 per month or $99 for a whole year up front. The original Origin Access plan is staying at the same $4.99 per month or $29.99 for the year. Wing Commanders 1 through 4 and Privateer are included with either option. The company also offers a similar setup on Xbox One called EA Access with comparable features to the Basic Origin Access, but WC is not available there. The new Premiere details have many similarities to Microsoft's Xbox Game Pass, which has surged in popularity over the past year, so it makes sense that EA has branched out in a similar way. Find more information here.

"Play the full game before launch. Get new EA games first, access to a huge collection of games you can play whenever you want and a 10% discount on Origin digital purchases! ONLY FOR PC" 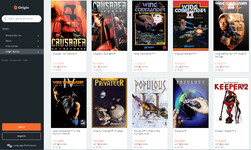