BritizenCon is an annual event for fans of Star Citizen in the UK. In conjunction with JR Design & Fabrication, the main panelists at the event were able to sit behind a really cool desk inspired by a setting in the game. On top of that, the WC fans there also built a really cool arcade style kiosk with built-in Wing Commander games! They designed a cabinet around a 27" monitor and loaded up Wing Commander 2, Armada and more on the systems. Everything was topped off by a keyboard and joystick built into the frame so that fans could simply walk up and jump into the games. You can read up further on how everything came together here. 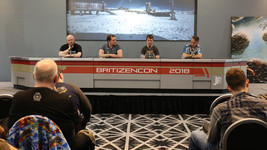 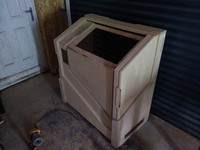 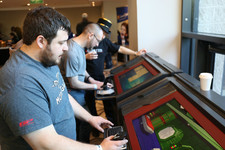 Second on the list was to recreate some of the trading consoles and re-purpose them as Wing Commander arcade machines. As soon as we had this idea it had to be done!!

Painted and in place at the event they certainly went down well with the crowd and the people we spoke to really enjoyed the trip down memory lane playing through all versions of Chris Roberts' 90s games.