The Composers Play podcast's latest episode is about Wing Commander 3. Scott Tobin interviews the original composers of major video games in his series of video game shows, and he's got George Oldziey on the line for this one. There's lots of great backstory about how Mr. Oldziey got involved with Wing Commander and what it means to him to be supporting the fans still after all these years. It's definitely worth a listen! Check it out below, and if you like this one, their previous episode was about the Crusader series with composer Andrew Sega.

Apologies about the audio at the beginning. Check out and support George's music. 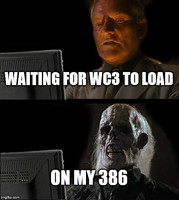