Here's another video article from the Interactive Entertainment digital magazine hybrid. This one goes all the way back to the first issue's included CD-ROM where they interview Origin founder and Ultima creator Richard Garriott. They cover a lot of ground and discuss what projects Origin was currently working on, what was in the cards for upcoming Wing Commander projects and why Origin made so many sequels. The first Interactive Entertainment was published February 1994 although the content appears to have been recorded probably somewhere in the middle of 1993. The ISOs for these issues can be found on archive.org.

This was billed as an "interactive interview" which meant that to watch the interview you first had to choose the question you were interested in from a list and then the answers would play in video format. For this reason, putting this into video format necessitated that the questions be placed in order and title cards added.

Questions answered in this video:

Wing Commander Meme of the Day: Yo Dawg Heard You 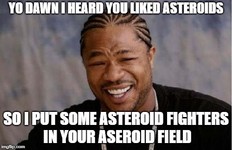