While a vexing problem continues to flag advanced ordnance mechanics, the new AI features of the Homeworld Remastered Mod have been released in the game's latest update on Steam. L.I.F. expects that these updates will provide a nice boost to the single player based portions of the game. He continues to troubleshoot some elusive crashes concerning missile launch behavior. The screenshot below shows a test shot where 150 Arrow fighters simultaneously launched over a thousand missiles and decoys. The game managed to handle that large volume, so the scope of the project doesn't seem to be the issue. Work continues to get to the bottom of things! 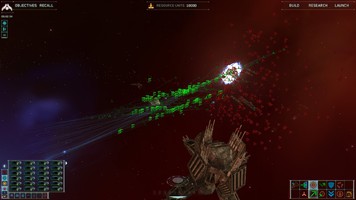 I went into slideshow battle mode, with all these squadrons fighting and dropping decoys at once, and it crashed way later than I expected, after dropping literally nine times more decoys and missiles than in all previous crashes, with the shipID for these missiles and decoys reaching 17,500. This means the shipID hypothesis must be scratched entirely, as there is no relation whatsoever between the number of weapons/decoys deployed, the identification number of these and the crash.