Archiving Wing Commander material is a subject that's very near and dear to us here at the CIC. From the University of Texas to EA Mythic and dozens of other projects, we've been on a mission to preserve Wing Commander history for nearly two decades. The next great adventure kicks off today as we attempt to save thousands of pieces of artwork created during the production of Wing Commander Academy. A huge trove of animation cels and design sketches have been uncovered in California. We've made arrangements to purchase the lot, but the total costs for everything work out to nearly $10,000. You can help us save this material by donating at a new GoFundMe page here. 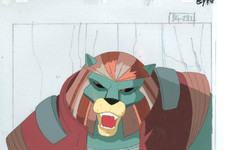 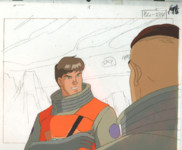 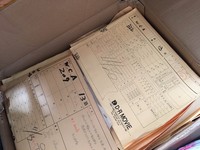 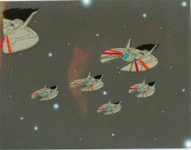 Once we can secure the load, it will then be gradually scanned and made available online. As an example of what may be available, check out this fabulous 240-page storyboard of the episode 'Recreation' (258 megabyte PDF, so download rather than click!). As you know, the CIC runs no advertisement and accepts no monetary donations or compensation whatsoever to run the site, so the campaign is strictly capped at the amount it will take to purchase the Academy art. Some have asked how they can help over the years, and now's your chance! We hope the attention brought to this effort also helps get the word out about George Oldziey's plans to get a second Wing Commander album recorded as there are two exciting WC crowdfunding campaigns running in parallel now. Asking for money is a little awkward, but we would only do so for causes we are incredibly passionate about. The process should also be very fun, and we can't wait to enjoy it with you! Read up more on the background and consider donating if you can - thanks!

What do you want?! Confederation spies have located a massive cache of Wing Commander Academy production artwork deep in the wilds of Southern California! There are 30 large boxes of artwork, each containing roughly 1,000 cels and several thousand sketches for a total of (we estimate) about 50,000 distinct pieces of Wing Commander artwork ranging from the cels used to make the show to the sketches and other drawings used to plan out scenes. My objective is to purchase this artwork and produce high resolution scans of ALL of it which will be made freely available to the Wing Commander community!

Where does all that money go? All of the money will go to the purchase of the artwork. For every $300 donated, we can buy an additional box, up to 30! (The remaining $800 covers GoFundMe’s fee and credit card processing.)

Will you do any other cool things? That depends on how you define cool! To help promote the crowd funding project (and because I really, really want to) I’ll be streaming live commentary of all thirteen Academy episodes. Once the artwork has been purchased, I’ll stream the initial exploration of each box so that everyone else in the world can see how goofy excited finding a drawing of Admiral Tolwyn’s arm makes me.