The venerable Rapier has been outfitted for the Border Worlds in DefianceIndustries' latest design. It's a derivative of the variant seen in Wing Commander 2 with some nice streamlining improvements to the cockpit and airframe, plus a badass stormfire gun mounted underneath. There's also a light coat of rusty UBW paint applied here and there. Also check out the cool wallpaper after examining all of the gorgeous posed shots!

The UBW gets another fighter! Here is the finished "J" variant of the venerable F-44 Rapier II. We originally intended it to fit in the gap between the Banshee and the Vindicator since the UBW doesn't have a true medium fighter, and it's cannon insofar as the WC4 novelization depicts the UBW as using Rapiers and Ferrets as opposed to Banshees and Vindicators. Not sure if we still intend on using it but I hate leaving things in a half-finished state. 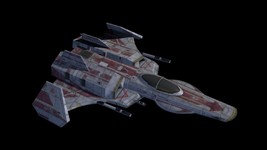 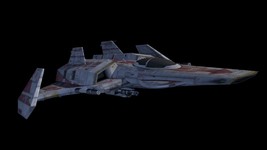 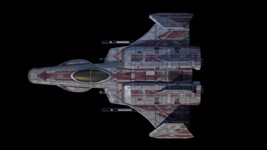 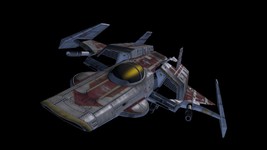 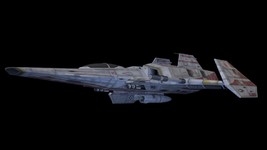 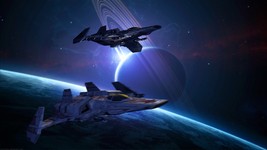 The F-44 J Rapier is a bit of an oddity in the Union Militia. Not only is it visually distinct in a naval air arm that favors functionality and ease of maintenance over technical wizardry; but due to its design as a dedicated space superiority fighter, its home in a force that relishes multi-role fighters for pretty much every front-line deployment leaves the Rapier as an odd-ship-out. Though largely relegated to a second line status within the Union Militia, the Rapier J still fills out an important role as a fleet interceptor, convoy escort, and advanced trainer.

The J model is an export variant of the venerable F-44 G built under license by Galatea Aerospace LLC in the Union of Border Worlds. The contract was originally issued during the height of the Kilrathi war to assist the Union Militias in helping shore up their defenses against a resurgent Kilrathi Navy. Over the years the basic J model has undergone some unique revisions including the removal of the original greenhouse canopy and replacing it with a bubble canopy for better visibility, replacing many of the stock engine parts with parts of local manufacture which necessitated lengthening the nacelles, the addition of a non-standard centerline hardpoint, and the enterprising technicians of the Union Militia have even designed a detachable gun pod for their much-loved Stormfire cannon. These changes as well as several other lesser modifications on the assembly line have become a matter of some legal entanglements between Galatea and Origin. The original contract between the two specified that the fighters were to be built to spec (thus guaranteeing an additional avenue for Origin to sell surplus parts and technical assistance) however the New Union Government is citing a subclause in the original license agreement between the Confederation Navy and the Union Militias which allows for the modification of any surplus equipment purchased by the Union as legal during a time of war or crisis. The lawyers will doubtless continue to wrangle of this for some time. In the meantime, there is little Origin can do to stop the production of the J variant.

Like all Rapier IIs, the J model follows the traditional heavy shields, light armor philosophy with an emphasis on speed and maneuverability over raw firepower. The standard armament of two laser cannons and two particle guns are standard and vary little over their Confed counterparts, the missile hardpoints and targeting and tracking computers have been upgraded to accommodate a wide variety of ordinance, allowing the Rapier J to mount 2 light missiles such as Darts or Rocket Pods, and four medium hard points which allow an assortment of Heat Seeking, Friend or Foe, or IMREC missiles mounted in pairs and defined by mission parameters and pilot preference. The other major departure is the gun pod, a self-contained Stormfire cannon with 200 rounds of caseless ammunition mounted on an auxiliary hardpoint added down the centerline. The pod can be removed by a technician or jettisoned along with the rest of the fighter’s external stores if needs be, and the centerline hardpoint has been plumbed for fuel so the fighter can carry a “drop tank” of extra afterburner fuel for a fast courier or far scout configuration.