It's certainly not every day we get to see new Origin concept art or unused designs from the classic Wing Commander games, but we've got a birthday treat today! Joe Garrity recently uncovered an amazing set of cockpit art and animations from a fighter we've never seen before. The lock and autopilot lights are unmistakable, and there are vertical and horizontal bars that could definitely be for a gun capacity and afterburner fuel. However, there are some remarkable differences as well. There seem to be two radar displays, and the VDUs flip open and closed. There appear to be supplemental heads-up VDUs that overlay on the windscreen, as well as something that resembles a very large targeting crosshair in the center of the dashboard. It has a very cool illumination startup sequence as well. 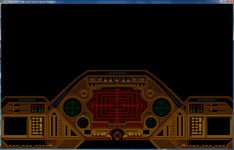 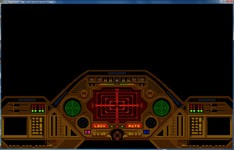 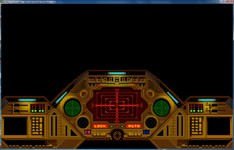 So, what is the ship? And what's up the functional differences we don't see elsewhere? Joe uncovered these on a 5.25" floppy labeled "DISK 9 - PANEL X-LBM SCREENS.ANM" from artist Dan Bourbonnais. He had to get the proprietary "Deluxe Animator" software going to read the files properly. The still screenshots are dated April 22, 1991, while the animation has a December 11, 1992 date stamp, which could be artificially delayed due to backing up or disk transfer. The brown durasteel could imply a Kilrathi design, but it lacks overt alien markings that the Dralthi II and Jrathek art contained. It's also interesting that this concept dates back to the time Secret Missions 2 was released, but the animations are ahead of their time and the different dashboard elements (quadruple 5.25" floppy drives are a nice touch though!) raise more questions than answers. LOAF's thoughts on the subject are below. Do you have any theories about what this could be? Post them in the comments!

A potential Wing Commander mystery is afoot! Dashing game archaeologist Joe Garrity recovered it from an old Origin-internal diskette... it certainly looks like a Wing Commander cockpit, but it isn't one that ended up in any of the games (and it doesn't quite /work/ like other WC cockpits.) Any ideas? What we have here… is a good, old-fashioned mystery! To preface this: I don’t KNOW what it is, but I can make some educated guesses as to possibilities.

First: I know that this immediately screams ‘Kilrathi cockpit’… but I would caution that I think that’s a bit of an anachronism. It is the same color as the Kilrathi cockpits we see later in the series, including the Jrathek and the ships in Wing Commander Armada… but in 1991, that color scheme had not yet been established. Wing Commander II (in development) was using the lighter tan color for the Kilrathi space camo… but it also used this same color for the cockpit of the human Rapier (as did Wing Commander I.) This would have also closely followed The Secret Missions 2, which showed the first Kilrathi cockpit… which was steel and purple. Finally, there’s no Kilrathi writing. At the time, Kilrathi text was a series of dots and dashes arranged vertically. The Dralthi Mk. II cockpit in Secret Missions 2 is full of them (and has human text on sticky notes added over them! Immersion!) while this cockpit has only English writing. [One other thing that makes it feel like a Kilrathi cockpit is the fact that the large, red central display immediately looks like the red Kilrathi armor indicators used in all five of their cockpits in Wing Commander Armada. It’s not the same graphic at all (and Armada was three years later, an eternity at the time), but it feels very similar at first glance!)

One thing I can say for certain is that it is NOT a ‘working’ (gameplay) Wing Commander cockpit. While the cockpits in Wing Commander I and II vary wildly in shape, color and overall design, they have several common elements that this lacks: 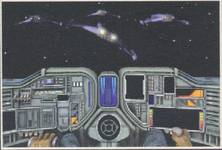 I will note that none of that excludes it from being concept art for a Wing Commander, and in fact many of the same failings this cockpit has are repeated in another bit of lost cockpit that we DO know is from Wing Commander from three years later (pictured right). This so-called mystery cockpit was used in advertising for Super Wing Commander, but does not match any of the art used in the finished game. It, too, lacks VDU spaces, reuses art from earlier Wing Commanders, is missing certain displays and so on!

It also has some elements that are distinctly not functional in Wing Commander II:

On the other hand, it DOES include elements that ARE unquestionably from Wing Commander: So, what games COULD it be from? To narrow down the options, I went back to the Point of Origin (Origin’s internal company newsletter) archive and found that the very first issue was published just under a month after the date on these files. At that time, Origin had five product development groups working on four original games: I include the scheduled release dates because it tells us where each game was at the time. Martian Dreams went to beta about a month after these images were finished, which suggests that it was getting close to wrapping up. Wing Commander II would have been midway through development, making it the most likely to be having new art created at that specific time. Ultima VII and Strike Commander were very early in the process, but demos of both were being created to show at Summer CES around this same time. (It also lets us rule out a few other projects that might have been tempting options: Wing Commander Academy, which DOES feature a similarly-colored Kilrathi cockpit, and Privateer weren’t on the table yet.)

With all that analysis, I’ve come up with several possible theories. I suspect Strike Commander and Ultima VII are not likely (while Ultima VII had a Kilrathi ship, it wouldn’t have been the focus at this point in development!), which leaves Martian Dreams and Wing Commander II. I believe it could fit into either game: