We haven't covered Shroud of the Avatar very much over the years, but Richard Garriott's spiritual successor to Ultima appears to be coalescing nicely as it drives towards a full fledged release. Last week the team conducted its last "wipe" of the pre-release servers, and the world that players are now exploring is the game's final persistent universe. Crowdfunding pledges will also sunset in a couple weeks as the various preorder bonuses expire. A new Star Citizen cross-promotion also caught our eye that offers up some nifty steampunk gear with the SC logo.

Speaking of Star Citizen, most exciting to us is that LOAF's recovery is going well and he's back on the job at Cloud Imperium LA. Their office move and subsequent futuristic remodel has been complete, and it's looking really cool. They've finished the shoot for the Squadron 42 story and audio elements, which is an important milestone for the campaign aspect of Star Citizen. The team is now focused on preparing a big status update at Gamescom in Germany later this month. There are still a variety of cool ships being turned out as well as some neat merchandise that have pushed them past an amazing $115 million. 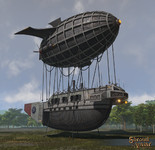