It's an all capi weekend here at the CIC! While keeping up with the RPG mentioned yesterday, steady work on the virtual CCG has produced some great breakthroughs. One of the first things that jumps out of the tabletop area is that the power point counters have been added for both Confed and Kilrathi sides. Also related to the game board, the four player variant of the game has been implemented so two Terran and two Kat forces can face off at the same time. Card handling has been significant improved with items such as user interface tweaks that show cards remaining in each pile all the way up to the system that allows players to potentially customize, save and trade custom built decks. A project page has also been set up at the VASSAL engine website. Eventually the mod will probably be hosted there, but for now the site has additional status updates, game mechanics info and screenshots. You can still help weigh in and provide useful feedback at the CIC Forums. 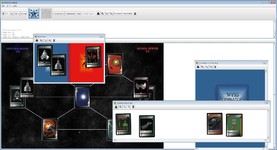 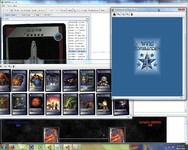 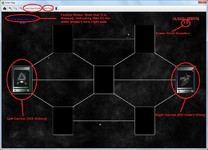 Getting there guys...this morning I added the necessary menus for card drafting, and I've added a feature that will tell players how many cards are left in the draw decks as well as the current size of their hands. I've also added the game rules, FAQ and credits from the data here at the CIC (taking the time to correct the board layout; I'll do further proofreading later) and added all of that to mod.

Most important of all - I've confirmed that decks can be built ahead of game time, saved and loaded at will. This fact opens up the game in ways I'm pretty sure I haven't thought of fully...it makes it possible for y'all to share decks among members of the community...something I hadn't really intended when I set out to begin the project, but a delightful bonus. I guess I'll build a few decks to put up on the VASSAL page along with the mod when the time comes, so all of you can adequately inspect my suckage. Seriously - I drafted the first deck for the game this evening and I think that if I were to have had to play an actual game with that deck, I would've rapidly gotten my backside handed to me......

The initial page at the VASSAL site for the mod is up. Not much there at the moment besides a few screenies. The mod itself is certainly not there (not yet anyway - give it time). As I've promised there, though, a "how-to" guide for using the mod is forthcoming.

Meantime - preliminaries: VASSAL has versions for Linux, OS X and Windows on their Download page. VASSAL is dependent on the Java Runtime Environment, so you'll need to install that before VASSAL will work. And you have to have VASSAL installed to run the mod, obviously. I say you have to have it installed - I've successfully been able to use VASSAL from a copy of the thing on my jump drive. Just saying. Windows users will be able to install the JRE during the VASSAL install if it detects that it's missing, Mac users have the JRE natively though if you're not using a version newer than 10.3 you'll only be able to install VASSAL 2.9.9. Linux users may or may not be screwed depending on your distribution; the VASSAL folks have links for the JRE for Fedora and Ubuntu.