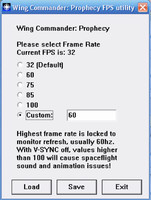 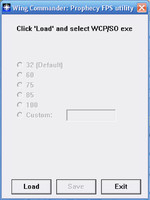 gr1mre4per has put together a neat new upgrade patch for Wing Commander Prophecy & Secret Ops. There are patches that upgrade the video to DVD quality, enable OpenGL graphics support and even add multiplayer, but the game is still locked at 32 frames per second. grim's patch updates the Prophecy or Secret Ops executable to run at any custom refresh rate, although 60 seems to work the best and provides nice and smooth motion. wcnut reports that it functions on a Mac with a wine wrapper, and it should also be compatible with Standoff or Unknown Enemy. Grab the patch (90 k zip) and test it out for yourself, and let everyone know how it works at the CIC Forums!

For a short time I've been teaching my self some coding with C++. Using HCl's fantastic site as a source of information, I made myself a few little tools. Although some of these were previously available, I wanted to make my own as a kind of 'proof I can' type thing. I made myself an IFF compiler/decompiler for any IFF file and a TRE/PAK un'pak-er' for Privateer. I've also extracted almost all of Prophecy's ship models, all detail levels, including many some people may have never seen (or may have, I'm a little out-of-date here). I'll create a separate thread for that soon.

But the one I want to give out now is a Frame Rate booster for Prophecy. By default, Prophecy runs at a fixed 32 Frames Per Second. I wanted to see if I could change it to increase it. Now I have, I put this tool together to make it easy for everyone to do. The advantage is that space flight looks and feels a lot smoother.

The tool has some pre-set levels and a custom level (limited between 15 and 1000). In most situations, 60 is enough as by default the game runs with Vertical Sync enabled, which synchronises to the monitor refresh rate, which is usually 60 Hz, so maximum 60 FPS possible.

It is possible to force V-SYNC off in most graphics drivers. This allows much higher frame rates. But this does start introducing some problems when the frame rate gets above 100. Some animations, such as shields, will happen quicker, sometimes to the point you don't even see them. Also COMMS can sometimes stutter. My personal favourite is asteroids will rotate stupidly fast. But for the most part, there are no adverse effects in game play and V-SYNC is better left on for the smoothest results.

I have tested the tool with Prophecy and both the web-downloaded and Prophecy Gold Secret Ops versions (they are slightly different) and it works on all of them. It should also work on Standoff, UE and other mods, but this is untested. I am also not sure if it will affect the multiplayer enhancement.

I hope you enjoy it.