Cannon Song has put together a nifty skin pack for Vector Thrust, a new flight sim based around today's fighter jet designs. Rather than import Wing Commander models though, he's reimagined the paint schemes of six craft based on their WC equivalents. Looks closely and you'll see this was accomplished very creatively! The "Confed" jets below sport the right colors, stripes, checker patterns on the Hellcat and even teeth in the case of the Arrow and Thunderbolt-inspired designs. On the Kilrathi side, the "Gratha" borrows from a design with a similarly raised forward fuselage, while the Jalkehi has larger forward-swept wings protruding from the aft. The Dralthi is also medium size red-tipped bird. There are future plans to redecorate even more fighters and maybe even capships. Special WC-themed voice packs may also be possible. Vector Thrust owners can grab the skins here. 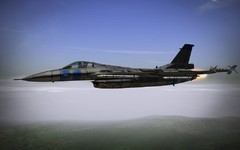 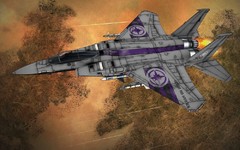 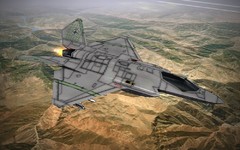 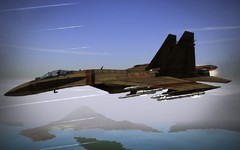 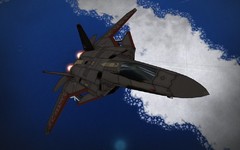 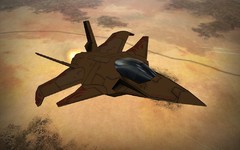 Hello! I'm a long-time fan of the WC series- and the site, and I thought you guys might be interested in a project I'm working on for the game Vector Thrust on Steam.

It's called "Wings of Victory," and it's my own personal attempt to inject a bit of the Wing Commander universe into the game. My first release for the project, a pack of reskinned aircraft in Kilrathi- and Confederation-inspired liveries, is already available on ModDB, and I plan to add things such as custom voice-acted voice packs for AI pilots and even a fully voice-acted mission to the project fairly soon.

I know it's not a traditional project, but it's been a really exciting experiment for me, and I hope to bring players of the game a nice taste of Origin-flavored nostalgia with what's planned!

F-27 Arrow V: "The Arrow? Man, they were about a dime-a-dozen, cheaply-built, had next to no armor or shields... best ship I ever flew! Shoulda seen the look on a Kat pilot's face when you kept on their fuzzy butt in one of those things- the mix of sheer confusion and growing terror almost made the war worthwhile... almost."
-Lt. Eric "Scrappy" Salinger, TCS Wisconsin

HF-66 Thunderbolt VII: "The 'Thud,' we called it. That's the sound one of 'em makes when it slams into some poor SOB in a first-gen Dralthi. I tell ya, we probably set the squadron record for ramming kills in those things- the fact that it could carry a metric crapload of ordnance was just icing on the cake."
-Maj. Johnathan "Johnny" Johnson, TCS Paris

Hellcat V: "Some people say that being a jack-of-all-trades is a bad thing, that you have to be good at one or two things, or else you're just pissin' in the wind. Those sorts of people must not have been assigned Hellcats. The 'Cat would do everything you wanted it to, and it never made a peep in complaint. And, well, it could do a whole hell of a lot!"
-Cpt. Alissa McKay, TCS Resolute (Fmr.)

Gratha: "The Gratha. There were many commanders who did not favor it. It looked too... 'Human' for them, too symmetrical. They did not favor its maintenance requirements or its heavy armament, thinking such things would make a warrior complacent, weak. Those sorts of commanders were fools."
-Kursi nar Hhallas, Former Kilrathi Ace

Jalkehi: "Heavily favored by commerce raiders and rebels, its long range and ample room for provisions allow the Jalkehi to operate for long periods without support. Heavily armed, and in the hands of a skilled pilot, absolutely deadly."
-Terran Confederation Intelligence Report 32775

Dralthi: "The maintenance chief said they had found the wreckage of a Dralthi. He asked if I would like for them to restore it, so that I could fly it. I responded by breaking his jaw. ...I had assumed he was insulting me."
-Lt. Kolya "Killer Kat" nar Phoenix (Formerly Kalles nar Kur'u'tak,) TCS Guardian of Sol, describing an altercation on the flight deck.