Klavs spotted a couple very slick digital tablet paintings from HandofManos. The first is a CF-105 Scimitar sitting on the tarmac. It's followed by a Rapier II taking off from a planet. Both have a really pleasing visual style with a great mix of subdued background settings and wonderful detail layered in where it matters. Let him know what you think and maybe he'll make more! 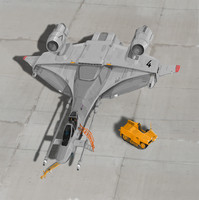 The CF-105 Scimitar is a medium fighter featured in the Wing Commander franchise. This unit is undergoing regular maintenance at a Landreich military facility.

A Rapier II taking off on a sortie. This would be a system defense unit since it launches from the surface of a planet.