This year's viral phenomenon over whether a dress in odd light was either blue and black or white and gold has rekindled the age-old question: what color is the Broadsword in Privateer? Most Wingnuts clearly recall that the bomber was mostly green in WC2, but it has a less memorable look when flown in Gemini. Fans have long debated what color highlights cover the wingtips and forward fuselage. Now is your chance to answer this question once and for all! What color do you see? Let your fellow Wingnuts know at the CIC Forums! 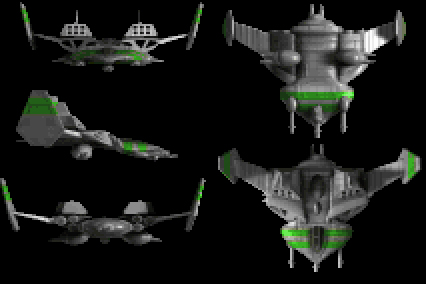 Our longtime friend Dan Akkbar Hardwicke is back on the scene with a new a business venture. He's leveraged his considerable street cred in the online space sim community to secure a sweet deal with the makers of the defunct Freespace Tactics board game. For just dollars on the penny, he's purchased 20,000 bulk sets of Freespace dice. Asked whether or not this was a wise investment, Hardwick replied, "I mean, they exist, so why wouldn't people buy them?" If he's right, fans of the series will soon be able to accurately reenact the exciting adventures of Alpha 1 with a handful of colorful blocks.