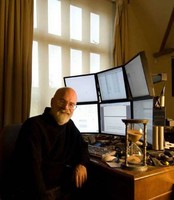 Discworld author Terry Pratchett passed away two weeks ago. The internet has done a much better job memorializing him than we could, but we would like to take a moment to kindly acknowledge him as a fellow Wing Commander fan. There's quite a few writers out there that share our passion for the series, and it was prominent sci-fi author Jerry Pournelle that got the prolific novelist into the series. He posted the following recently:

Terry was a friend and a fan. He had gone into survivalist mode when he read Lucifer’s Hammer, and came to the scenes where the survivors are discussing the old civilization. He said it made think, why be miserable when we have civilization. Better to try and keep it. After that he wrote at a prodigious pace. One day he was in Hollywood negotiating a movie, and came over for lunch. I showed him Wing Commander, he liked it, and I gave it to him as a present, remarking that this was a cheap way to slow the competition. He get addicted to it, but far from slowing his legendary output he produced even more. Wing Commander and its sequel Privateer were amusing interludes between the torrent of pages.

I have not seen him since his illness, because I have not been to Britain in many years. I fondly remember our last dinner in London. I wish we could repeat it. Our guest as Jack Cohen, and it was an experience worth repeating. Farewell, old friend. RIP