There's three diverse new Wing Commander sketches by talented artist NinjaLA. The first two are drawings that were painted in on a Microsoft Surface Pro 3. A Scimitar is under fire up front, and although its fuselage and wings are blended a bit more than we typically see, the acceleration absorber pods are unmistakable. The second image is a fighter returning from battle... maybe the same craft? The Ralari is an entirely digital drawing still in its early stages, but there's already tons of detail and an action scene emerging. And is that a tiny Dralthi for scale? 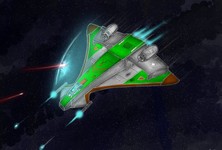 Not totally done yet but progress shot of a Wing Commander post card sized painting. Back from a successful mission.. but the deck officer looks less than amused.