Klavs has another Kilrathi ship up his sleeve, and this one's a fierce fighter! The Hhriss, as it appeared in The Secret Missions 2 alongside the Snakeir, is a very predatory design shaped around agile wings and powerful guns. Klavs has done a great job accenting the design with color and stitching together armor plates to give the ship an especially tough look. He's also written a fictional glimpse into the thoughts of a Varni that would explain their absence beyond Crusade. 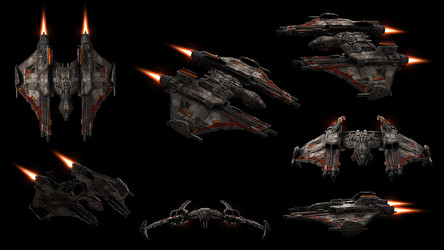 The Hhriss will not darken your skies because we corrupted them.

A few cycles is all it will take. Their strength will crumble to dust, their power will turn to bitter ash. Their structures will not hold shape.

Eventually, the Kilrathi will know the reasons why. We will not survive. We pray that you will find this message. That a million years from now you might finally learn the terrible price for this small, unknown victory. That you might remember us.

The final gasp of the Varni was one of defiance. We pray it was not in vain.