The Kilrathi onslaught continues! Klavs has moved up a bit from his recent flurry of Kilrathi fighters to one of the big boys. This Fralthra looks like a mean son-of-a-gun. Its six fins and prominent fore section give the ship quite a bit of menacing bulk, but there's also a pair of large and eye-catching hangars in the rear. Nothing that a Confed attack wing couldn't handle though! 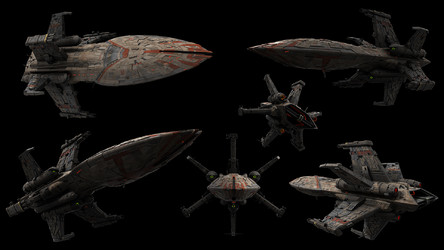 The bogey appeared behind us at an impossibly low angle, tearing through the upper stratosphere, accelerating as they came. In seconds, they were clear of the ionosphere, shedding the corona of excess plasma from their insane acceleration up to orbital velocity. One contact became many and it soon became apparent our little tin can was hellishly outmatched. A living nightmare of snarling durasteel, torpedo launchers, plasma cannons, and a full wing of fighters was bearing up at us, and there was no way we could get away in time.

Captain Dominguez took a sip of his tea and turned to me. 'Battle Stations please Kate, we might be in for some rough handling.'