wackymidget has had some time to think about his reimagined Scimitar design since he first showed it off, and this second version has a new look. The lines are a little more sleek this time around, and there are more design cues inspired by modern jet fighters. Even without textures, the ship renders came out pretty nice. It packs quite a missile load out now too! More explanation on the ship's design tweaks is below. 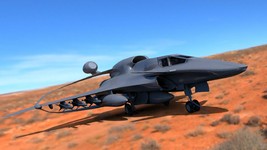 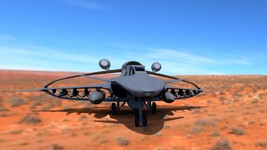 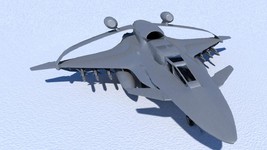 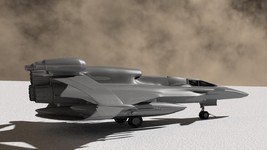 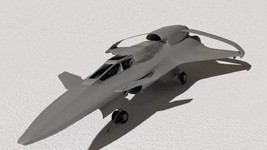 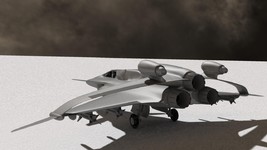 It's been a while. I wasn't too happy about the design. It wasn't really how I envisioned it in my mind. So I remade almost everything from scratch! I wanted it to be much more like a modern fighter jet. Since it has three engines I envision it as an interceptor. It should be able to launch from anywhere and intercept enemy attack craft and bombers before they can fire their cap missiles or orbital bombs. So it will probably have a very long radar range and carry mostly BVR (beyond visual range) (long range) missiles. It is designed to be fuel efficient. It has a joined wing configuration, which reduces induced drag. The forward swept rear wings and the delta shaped front wings give it the benefit of the high angle of attack of the forward swept wing and stability of the delta wing. The carnards make it an agile atmospheric fighter. Since it doesn't have vertical stabilizers (Six-Gun Slim didn't like them), it should have thrust vectoring to compensate for that. So I gave it the exhausts of the Eurofighter (which will feature thrust vectoring). I gave it external fuel tanks for added range and to have enough fuel to reach orbit and reach the Tiger's Claw after take off from the ground.

I still need to model a few details on the scimitar and still need to texture it. But I'm too excited to not post some of my renders.