Oceankhayne spotted a fun project for the ZDoom port of the classic first person shooter. A modder named WARCHILD_89 has overlayed a Wing Commander 1 interface and rough gameplay mechanics to simulate spaceflight. By clearing the floor and tweaking the skybox, a simple hybrid of the two games is possible. Energy weapons fired from a Hornet HUD are working now, and the player will be able to go after Doom enemies that behave somewhat like hostile ships. The creator has plans to create a space combat mod to expand on this. It'll be interesting to see if he can actually pull it off! You can follow the project here. 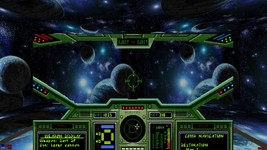 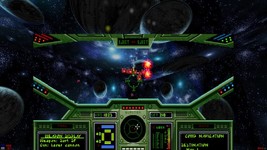 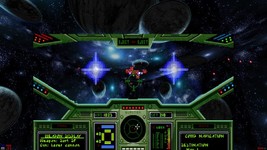 I always loved playing Wing Commander on the Amiga 1200 when I was a little boy and today I think: "WOW, this game does not seem to be technically too different from ZDoom, so why not mix it together?"

I was very sad to read on the internet, that EA Games did never keep the source code (officially it has got lost when Origin Interactive quit its business :( ) so instead of getting the source code by decoding the exe, why not rather redo the game from scratch?

So here we go: For testing purposes, I made a huge map with a test skybox all around, the whole map is covered by an invisible 3D Water Floor. I never made any custom HUDs, so I currently made the spaceship cockpit to be a weapon (silly :D)

I use a selfmade little script to avoid the player from drowning and the Fly cheat to make the flight more realistic and to avoid the "weapon" to bob around, I can already fire Rockets and Plasma balls towards cacodemons, which I think could be recoded to act like enemy spaceships. (Original sprites from Wing Commander can be found on the internet).

This Project will be part of my Doom Nemesis Project.

Doom Nemesis will start this way: After surviving Doom and Doom 2, our Doomguy gets found on earth by a huge spaceship controlled by an alliance of former UAC Members and the remains of earths army. Some flying Monsters are able to survive in space and approach the spaceship. You will have to fight inside the ship, repair and defend the ship from the outside and everything will end up in a big space combat before getting crushed and falling all the way down back to earth.