Whiplash has been tinkering with a new tool to help the pilots of Gemini Sector. He's used Privateer's commodity prices to build a calculator that helps predict the best cargo purchases and trade routes. The basic mechanics are working, but he's now asking for feedback to fine tune the best formulas and user interface. If everything works out, he may be able to get this running at a smartphone/tablet app for convenient Quine in the cockpit! 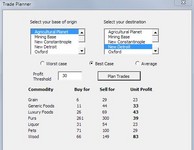 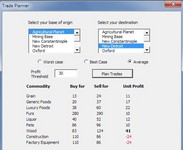 Hi folks, best wishes for 2014! I wanted to tell you a bit about my latest project. It's not another ship model; the Hellcat is still WIP and I will be sharing some more updates on that soon, hopefully.

I've been toying for a while now with the idea of creating some kind of app that could be used to calculate the most effective trade routes in Privateer. Many purists will no doubt tell me that figuring it out for yourself is half the fun, but I've done that anyway, and in fairness the official playguide also gives you quite a few hints. Mostly though, I just wanted to see if it could be done, and to set myself a little programming challenge.

I've made good progress, and most of the groundwork for the calculation is done. As input, I used this price list, which should be pretty well-known to most of you. By copying this into Excel and applying some VB magic, I now have something that looks like this. The price checker, for instance, will give you the lowest and highest prices for a commodity as well as the bases where they occur.

The function I am actually interested in though, is choosing your origin and destination, and then obtaining a list of the commodities you can trade as well as which ones will be the most profitable.

Here's the catch though: The spreadsheet gives you min and max values, but in reality these values almost never occur. You are far more likely to see values somewhere in between. Currently I'm calculating a simple average using (min+max)/2, but that is far too simplistic for my taste. It's more likely that the prices variations are defined by some kind of function.

You can select the bases you plan to travel from and to, and it will spit out a list of all commodities you can sell at the destination base with a non-zero profit margin. By setting the profit threshold, you can select which ones the app should bold as being particularly profitable. Negative values are shown in red. You can also switch between worst, best or average prices, and the output will change accordingly:

So: If you have any thoughts or suggestions, please let me know. I'm hoping someone has an idea of how I could better model the price fluctuations.

I have quite a few friends who do a bit of mobile development, so once I have the code figured out, I can ask them for some help in writing an app. Task switching will have to do for now though. Any further comments / questions / suggestions? Any ideas or changes you would like to see?