The ingenious hacking of WC1/2 continues! HCl's latest achievement is understanding how the video sequences play in the WC2 engine. Items such as the games' intro movies and landing clips are a type of FMV scripted into the game. By adjusting how this is coded, HCL has managed to take bonafide live action movies and make them play in game. A test using the simplified capabilities of Wing Commander Academy has already proved successful! A brief segment of the Wing Commander Movie trailer was encoded and plays back - a screenshot is below. Further tweaking should allow for better color palette access and smoother rendering. You can read more about this discovery and try it out for yourself at the CIC Forums. 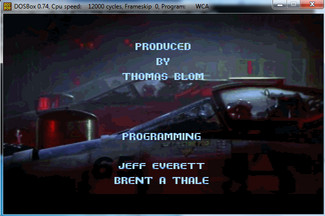 As with my other WC2 mods and experiments, I decided to turn to WCA for a quick test, as a proof of concept. ... I took a small 12-frame sequence from the WCM trailer and encoded it with my animation encoder, quantizing the image to the existing WCA palette. I put the newly encoded file into the WCA\GAMEDAT folder and launched the game. Sure enough, the game plays the first animation with the Wraith hunting down the Drakhri and, once it's done, it plays the new WCM animation. Pretty cool! Here's the result.

Not too bad! The canopy-closing animation does play rather quickly, since it's only 12 frames, and the image would end up looking a bit better if I had computed a new palette (and used a better quality source), but not bad for a first test :) I would expect we can have WC3-FMV-like quality animations in WC2, if we change the palettes often enough (although at a much higher rate than WC3 FMV, since WC2 uses simple RLE...).

WC1 should be able to play these animations with some COM-file hacking... That's something to do later though. Anyway, I'm attaching the new INTRO.VGA in case you want to give it a try, or tear it apart for study.

If you missed it earlier, delMar has also recently figured out how to create custom WC1 cutscenes as well!