The Heart of the Tiger Comes Out Ahead

In a fun contrast to yesterday's news that showed a 3D Hellcat transposed into a world of 2D sprites, today's update turns classic 2D Bluehair into a 3D model. dczanik has actually made two versions of Christopher Blair's head. The first is a stylized cartoon look and the second is his first cut at a three dimensional render. This isn't a final product, but it's already pretty sharp. dczanik is famous for reimagining classic WC ships, but apparently he's got quite a range of artistic ability. Does anyone out there have a fan project idea that would make good use of Mr. Blair's head? 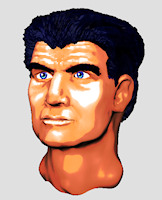 I created a classic Wing Commander 2, "Blue Hair" Christopher Blair in 3D. Thought you guys might like it.

Not finished, his eyes are a little wonky. Maybe one day. I'll make the character available as a 3D download for the community.