A small treat from Klavs today: a roundel design for his Wildcat fighter concept. Military aircraft typically carry an insignia that identifies the nation or faction to which it belongs. A classic roundel is made up of concentric colored circles, but the Confederation star adds a nice touch. 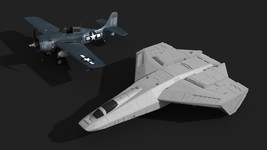 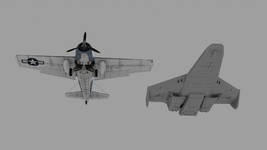 The Wildcat was already quite old at the onset of the Kilrathi war and was replaced several years into the conflict. From the Action Stations novel:

"There is a one in three chance, sir, that within five years I'll be dead. The reason, sir, is that the fleet board begged your committee for the additional ten million for a Wildcat upgrade. The engines are outdated, stress flaws are becoming increasingly common. In short they're already five years past their design limits. The Wildcat is thirty years old and its replacement, thanks to cutbacks, won't be fully on-line for at least five more years. Therefore we are in a bind, sir. Since neither the upgrade facility for the Wildcat nor the main factory for its replacement went to your district, you turned on the plan and have locked it in committee for three and a half years, sir."