"The Morningstar is generally recognized as the current Confederation state-of-the-art capital ship destroyer..."

While fans are still waiting for Shapeways to deliver their new Broadswords, Ferrets and Sabres, Klavs has already taken the wraps off his next design. The Morningstar heavy fighter has been modeled and is now awaiting textures. Klavs even included the Mace tactical nuclear missile in addition to a host of other ordnance. The F-95 spaceframe's sleek curves and intricate details are top notch, and the accompanying excerpt from Maniac's autobiography really hits home too. 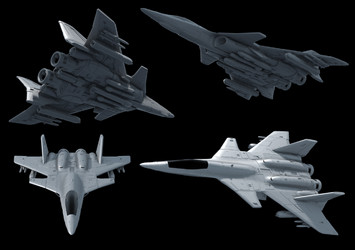 Even in the harsh glare of the desert sun, the torches cast stark blue-white light as they bit into the last of the Morningstars. It hurt your eyes to look at it, even from a distance. But I don't think any of us looked away.

Once the fighters were cut into manageable pieces, the ship-breakers rolled across the tarmac and went to work, effectively shredding the assemblies and reducing the blood, sweat and tears of the last three years of our lives to unrecognizable heaps of scrap.

The Ki'ra observer watched impassively as the sound of rending durasteel screamed at us from across the tarmac. When it was done, he bowed ever so slightly to Colonel Anderson and strode off. His human entourage scurried along behind him, struggling to keep up.

Elsewhere, the remaining seventy three operational Morningstars, along with their spare parts, tooling, test fixtures and design data were being quietly erased from existence.

What the Kilrathi had failed to do by espionage and force of arms, they had accomplished through our own politicians.

I stood there a long time, feeling the sweat trickle down my back as the sun went down.

Bonus question: Who knows where the quote in the headline comes from?