ScoobyDoo has added another Tri-System vessel to his fleet. This time it's a popular light fighter that Scooby has renamed the Loki. In this case it's been beefed up a bit with twice as many regular guns and a hot Stormfire on the ventral side. I think the textures are looking spot on, but Scooby may yet tweak the coloring and finder details a bit more. The light blue highlights look even better than the strong teal overtones in the original, in my opinion. Someone could make quite the P2 mod with this fleet! 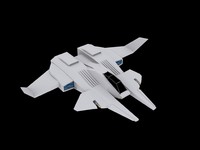 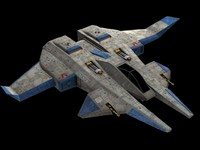 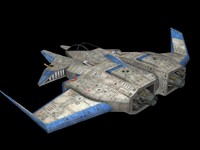 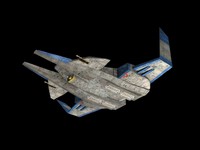 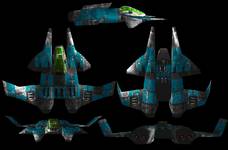 Also the Loki (the Duress ["duress" is more of a verb than a name]). I had to take some personal liberties with it, mainly the intakes and gun mounts (2 particles, 2 mass drivers, 1 stormfire). I wish I had seen Hudson's version of the Duress earlier on. It's about the same length as the Hellcat, although (I) fixed the cockpit a bit, was way too big for the ship.

I originally had the a mass driver there. I was going to put vents where the mass drivers were. Then I was debating on deleting that section where the stormfire is now. Also fixed the cockpit a bit, was way too big for the ship.