Klavs was so impressed by John Douglass' physical Fralthi model, that he decided to digitize it! The electronic version of the model splits the forward prongs and makes the inner engine nacelles more prominent to strengthen a few of the features emphasized in Wing Commander 1. It also borrows the sleek swooping wings and cannons that Mr. Douglass designed. There's also a nifty cut-away image that shows how a small contingent of fighters might park in the bay. And something about that side profile still looks gorgeous... 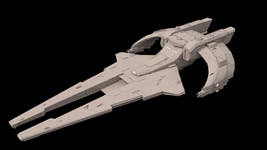 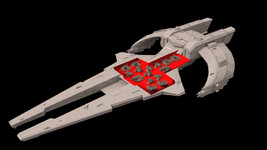 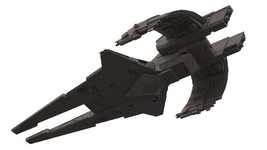 Thanks guys, I whipped up a quick Fralthi to blow up (and capture) based on John Douglass' awesome physical models. He's very talented, I'd have cut myself open and bled out if I tried any of this shipbuilding in real life.

You can see how they could fit some fighters in there, but definitely not the ideal carrier (Disclaimer, my Kilrathi fighters are a bit smaller than canon).