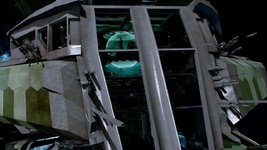 It's been a big day for Roberts Space Industries! In addition to the video below, Chris Roberts has penned a lengthy letter that covers current status on his project. His website has also kicked off a new set of features called "Spectrum Dispatches." The first one is a transcript of a rowdy newscast. Finally, there's word that more ship info will be released soon.

We will be releasing details on the various ships on over the coming days, and you should know that Conceptual Artist superstars Ryan Church and Jim Martin are hard at work visualizing them, which we will share when ready (this won’t be in the next few days though – it takes time to do things right!)

The pledge drive has also had an amazing day! The last 24 hours have brought in $200,000, including more than $90,000 and 2000 new backers on Kickstarter. For those unsure of where to contribute, both tallies will eventually sync up and contribute to the same pool, so KS supporters are working towards the $2 million minimum and stretch goals. Eventually, the main RSI interface will allow upgrades, although this feature is already available at Kickstarter. KS will not bill you until the end of the campaign, although Paypal also includes a "BillMeLater" option. KS also deducts a 5% fee for their services, but is very user friendly. Not all countries are supported however, so many Europeans or people who prefer Paypal should use the main RSI site.

We didn't have to wait long for the big news that Chris Roberts promised earlier today - you can now back Star Citizen using Kickstarter! To complement the announcement, Mr. Roberts has also produced a video to appeal to anyone still unsure about pledging. It is well worth watching, if only to see Mr. Roberts' choice of reading material.

There's also been a slight tweak to the names of the $5,000 and $10,000 tiers. The first was renamed from Lt. Commander to "Space Marshall," and the higher level went from Commander to "Wing Commander." Awesome!

If you have already made a pledge but would like to show your support on Kickstarter too, you can buy in to a new $5 pledge which comes with a bonus ship upgrade.

For fun, we’ve created a small Kickstarter pledge for existing backers. It’s called the “Kickstarter” and it’s an Electro Skin Hull Enhancement module. This is an upgrade package that players will be able to buy in game that allows ship owners to switch their hull appearance at a flick of a switch. The idea is that we will make skins available and allow players to make their own (within rules) once the game fully goes live. So for the $5 “Kickstarter” pledge we will add it to your current ship package, along with a custom skin that will tell the world that you backed twice! We added it to Kickstarter to allow fans to show their support in both places without breaking the bank.

If you'd like to add a bit extra to your package, just make your way here!

Roberts Space Industries has just hit $1,000,000 in their pledge drive! The milestone was accomplished just half an hour shy of the 10 am target set by Wing Commander creator Chris Roberts. Since this goal was met, people who have already pledged will get an extra 500 credits added to their rewards. In addition to this, the lucky person who contributed the millionth dollar and one random supporter will each receive a signed copy of the original Wing Commander! Now how fast will the next million come? Mr. Roberts also plans more "big news" later today! Stay tuned...

Thanks to everyone that helped push it in the last 10 hours! 50% of the way to the minimum goal in just over 7 days!!!

And there will be some additional big news in a few hours.

...You guys are all legendary!