Bragging About a Blaster!

We've had a lot of questions about what is going on with the Wing Commander computer project. When I started building the fourth Wing Commander computer I set a seemingly impossible goal: I'd like to add a 3DO Blaster to the setup. The 3DO Blaster was an ISA card which allowed PCs to run 3DO games in Windows. Because of the VGA connection it's absolutely the best way to play--and get screenshots from!--Super Wing Commander and Wing Commander III 3DO. Unfortunately, they're extremely rare today... running for upwards of $1,000 each on eBay when they do appear. They're also extremely awkward, requiring a specific model of circa 1994 CD-ROM drive, a particular class of Sound Blaster and an internal VGA feature connector.

Well, thanks to a very lucky Yahoo Japan auction I am proud to report that Karga now features a 3DO Blaster! A 3DO Blaster that WORKS! And there are no more worlds to conquer. Any idea what other rare bit of hardware I should start looking for? You can read the whole story here. 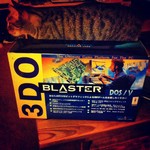 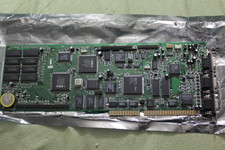