Here's another preview of Klavs' miniature ships. Although current technology still doesn't make large designs really feasible, the scale here is half of what was intended. Compare the tiny Super Rapier to the larger craft for real 1/600 scale. The great thing is how much detail is present in the accidental 1/1200 scale models. Since the penny-size ships came out so well, the larger designs should all look great! 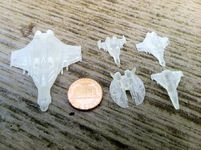 They work! Except I accidentally ordered them at half scale. So they're even smaller. Amazingly enough, these little guys still hold detail quite well. Compare these to the 1-600 scale Super Rapier. Even the fragile little Dralthi laser cannons came out completely free of defects. Keeping in mind that these little ships are the size of a penny! ($0.01 USD)

Going to order a set at 1-600 scale now just to make sure they work, then I'll make them available!

Hopefully many of you are already enjoying Wing Commander Academy on DVD. If not, here's a couple shots to salivate over! The second image adds in the two major American releases of the Wing Commander Movie DVD, plus the DIVX, movie soundtrack and old fan-made Academy DVD for good measure. The set does appear to be coded for Region 1, so Wingnuts in other areas may need to get creative to view it. It always feels great to hold a new boxed Wing Commander product! 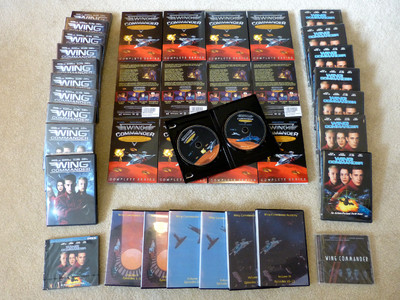