Here's a preview of new designs that Klavs is working to bring to the Shapeways model factory. If all goes according to plan, this foursome may be available in a future bundle pack together. It's an interesting assortment of ships - Rapier, Super Wing Commander Rapier, Scimitar and Dralthi - and they all look fantastic! 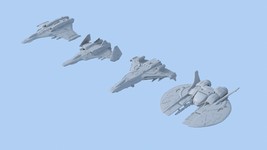 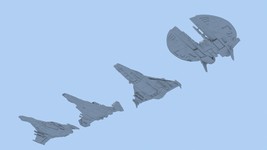 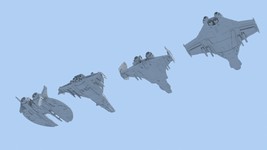 I've ordered prototypes of these, just to make sure everything is working before I release them to you guys. :) I'll also update the single Scimitar when I confirm that the prototype is working.

All ships are scaled to their correct sizes, except I actually made the Dralthi a couple meters shorter than cannon (28M) since it already looked to big by comparison. The Super Rapier has similarly been scaled up slightly, reflecting a slightly larger spacecraft. Mostly to keep the canopies the same size as modeled.

The 1-600 scale ships wind up being nearly the same size as some of the old Star Wars action fleet Micro Machines, and conceivably if you had any of those little stands remaining, you could drill a small hole and mount them on a stand.