Richard Garriott's company, Portalarium, has announced its next game: Ultimate Collector Garage Sale. It's a social networking app that revolves around hunting down various collectibles and decorating your house with them. There are thousands of items to search for, and the game integrates with actual merchants to provide opportunities to buy certain items in real life. The game's executive producer is former Wing Commander vet Dallas Snell, and Richard has big ideas about the mass-market appeal of this game and the groundwork it lays for Portalarium's future. 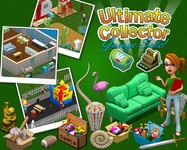 AUSTIN, Texas--Portalarium™, an Austin-based publisher and developer of premium quality games for social networks and mobile platforms today announces the creation of the company’s first original social network game, Ultimate Collector™: Garage Sale. The game is being developed under the guidance of hall-of-fame designer Richard Garriott and will introduce a new category within the social media space, shopping and collecting. The game is nearing initial launch completion and will be moving into closed beta service just after the holidays.

“The collectible craze is growing by leaps and bounds in this country and it’s becoming popular in other parts of the world,” said Garriott, co-founder and creative director at Portalarium and an avid collector in his own right. “It’s been fueled by cable television programs such as American Pickers, Pawn Stars and Storage Wars. By the broadest definition, this is an unregulated multi-billion dollar industry in the real world. Ultimate Collector spans the gamut of that entire activity and is a way for treasure and bargain searching people to transfer that enthusiasm - that passion for the ultimate hunt - into the social network space.”

A collecting game goes hand in hand with how Richard Garriott has lived his life. His home in Austin is full of unique and unusual items he’s collected over the years: shrunken heads, vampire killing kits, quack medical devices, centuries-old armor, automata mechanical toys, space artifacts, swords and scientific instruments, many of which you’ll find in the game plus a whole lot more.