Lego Minis All Lined Up

st3lt3k pointed out that we never showcased saf0775's full lineup of Lego minis. They're a pretty awesome assortment of classic WC fighters, and it's amazing how accurate they look with so few bricks. With Lego Digital Designer, you can view instructions on how to build them yourself! Grab them in Confed (20 k zip) or Kilrathi (16 k zip) format. 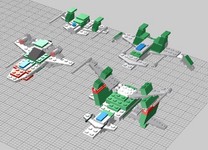 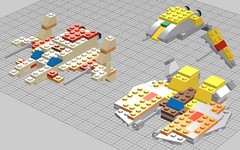 It's been a long time since the last update on the Wing Commander Collateral Damage mod for Secret Ops, but JasonRocZ is back at work. He's posted two new screenshots of recent progress. The first is a Halsey class station as pictured in Wing Commander Arena, and the other is his light "Thresher" Nephilim craft. 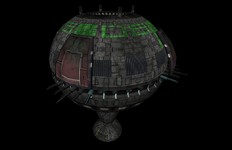 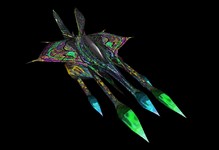 I'm still working on missions script. I was able to get the friendly Capship (The Destroyer) in the game. Most of my work lately has been doing missions script and also doing voices (I was actually able to do a few of the voices myself) while I employed (At the price of beer and food) a few others to voice 2 female roles and 2 kilrathi roles. I'll try giving a sample of one of the Kilrathi friendly pilots in a few days.