Billy Cain also provided a copy of the August 1997 issue of the German PC Games magazine, which features a five-page preview of Wing Commander Prophecy! It's worth a look even if you don't understand the language--some of the early screenshots are fascinating, and it features the only known photograph of the Wing Commander Prophecy team's "war room," an elaborate wall of gameflow options connected with string that Billy likened to 'A Beautiful Mind'. Another interesting note--the early TCS Devereaux rendering with the ship name in huge block letters. I don't speak German, but this seems a lot cooler than previews in American magazines--featuring information on the developers themselves rather than just listing features of the upcoming game. 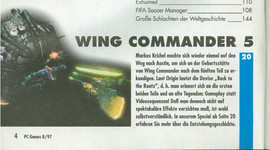